The Adventures of the Man of Bronze 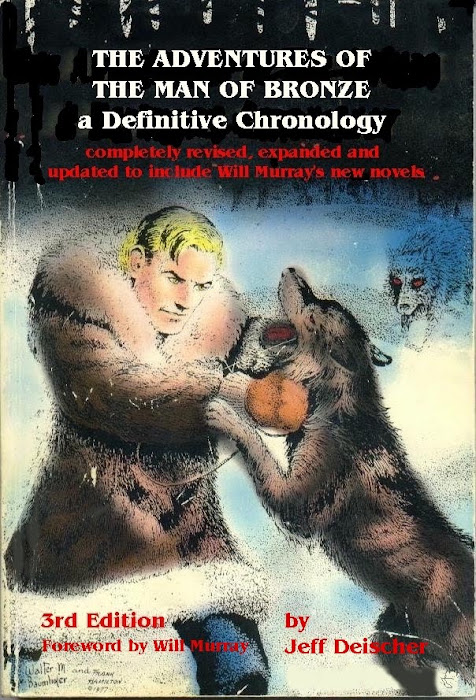 clicking on image will take you to sales page

Hi! Welcome to Westerntainment. Our goal here, as the name implies, is to provide entertainment. Well, every publisher wants to do that. We specialize in adventure here, both real and fictional.

The "western" part of our name comes from the fact that we are located in the West – Denver, Colorado. But we are also in the West in a global sense, which is appropriate since our first book was a travelogue about China, Over the Rainbow: a User’s Guide to My Dangyang. This was written by one of our mainstays here, Jeff Deischer, about his six trips to China 2005-2008. It chronicles his experiences traveling there, one of which was getting married!

For those of you unfamiliar with Jeff and his work, he is the author of The Adventures of Doc Savage: a Definitive Chronology (also known as The Adventures of the Man of Bronze: a Definitive Chronology), numerous articles about Doc Savage and The Winter Wizard, starring his own pulp character, the Challenger. For Westerntainment, he’s also contributed The Marvel Timeline Project, with Murray Ward, which chronologizes all the stories of the early Marvel Age, and The Way They Were: the Histories of Some of Adventure Fiction’s Most Famous Heroes and Villains. And yes, we are trying to get him to do some fiction for us.

Our second offering was The Overman Paradigm by Kim Williamson, the first volume in the OVERWORLD series. Overworld is an Earth where an alien crashlanded in Los Angeles in 1942 (based on the famous "Battle of Los Angeles"), which led to the emergence of superhumans. Overman, the first and mightiest of these, was Overworld’s first "overhero". This volume tells the story of who the overheroes are and how they came to be – though the full story will be told in volume 2, Call to Arms.

Our final offering of 2011 is Divided We Planetfall, the first in the BRAVE NEW WORLD series by Lawrence V. Bridgeport. When a spacegoing luxury liner is struck by a rogue meteor, its passengers and crew must evacuate to the nearest habitable planet – which is uncharted, meaning that there is little hope of rescue. The castaways break into socio-political groups, and try to rebuild civilization. For each community, this means something different. For one, it means the conquest of Terra Nova, as the planet has been named.

NEW FOR 2012!
Spook Trail, Jeff Deischer's latest pulp novel, is now available through Westerntainment! This is New Pulp at its best -- an authentic pulp story written in authentic pulp style by a master of the genre. Adventurers, Inc. first appeared in 1946, in a story written by the chief ghost writer for the DOC SAVAGE series in the Forties, William Bogart. Jeff has resurrected the characters and tweaked them a bit to make them unique in pulp history: they are three equal partners, not a leader and his assistants. When the Scare Devil, an Ozark spook, starts making people disappear, Adventurers, Inc. is called in to find out why! Look for the new cover! Hand-picked by Jeff, it's a doozy.

And Jeff's The Winter Wizard is back in print -- and we've got it!  First published in 2008, it has been out of print for a year. The Challenger is in the mold of Street & Smith's heroes Doc Savage and the Avenger, a multi-talented crimefighter surrounded by expert assistants. The premise of the character is, what if Street & Smith had made one last attempt to create a pulp hero after the war?  The Challenger's foe in the first novel in the series, set in 1947, is a madman who can control the very weather.

IT'S BACK!
Jeff Deischer's landmark chronology of Doc Savage, The Adventures of the Man of Bronze: a Definitive Chronology, which went out of print last year, is now available. Thoroughly revised by Jeff for better readaibility and easier consulting with an expanded index, this edition includes Will Murray's three new Wild Adventures of Doc Savage and a number of Jeff's essays on Doc, some of which have seen only limited publication.

As we wrap up our second year, I'm proud to announce our first space opera saga, by Wes T. Salem.  The Brotherhood of Terror is a trilogy that tells the story of the Brotherhood of Sabours, an organization of psychic warrior-priests. Four of these Sabours uncover a plot to destroy galactic civilization, and pursue a renegade across the Orion Arm of the Milky Way to investigate the mystery of the "Sund". The second and third volumes of the trilogy will be published quarterly.

Finally, we are ending the year with the second volume of The Brotherhood of Terror trilogy. While on a simple mission, the quartet of Monitors learn the breadth and depth of the Sund's power. Join the Brotherhood of Sabours in The Reavers of Kargh.

2013
Our first series wraps up with the final volume of the Brotherhood of Terror trilogy by Wes T. Salem. In The Red Brotherhood, each of the four Sabours go on their own, private mission and must face a personal menace, then re-group to face their final foe -- the mysterious leaders behind the Sund! But be warned, this is war and not everyone survives in war.

Jeff Deischer's THE GOLDEN AGE continues with Mystico (May) and Dark of the Moon (November). While The Golden Age focuses on the superheroes of the Standard/Better/Nedor publications, Mystico looks at the Auric Universe's mystic heroes, while Dark of the Moon shines the spotlight on the AU's fringe characters such as Judy of the Jungle -- and ties together no less than ten stories of speculative fiction from earlier eras written by Jules Verne, H. G. Wells, Edgar Rice Burroughs and others! And now, The Golden Age is also available from Westerntainment, both in print and on Kindle!

THE BOMB
Really big news: R. A. Jones, author of many comic books in the 1990s, has written a special book for us: an honest-to-god novel featuring the Centaur Publications superheroes that he brought back to like in PROTECTORS for Malibu Comics (1992-1994). This is a reprint of those issues, but an all-new novel, set in the pulp era. Spanning several centuries, The Steel Ring features a number of Centaur characters, including Amazing Man and the Clock, as they team up to combat a menace that is bringing about a second world war.

We end this year with the third volume in our popular series, THE GOLDEN AGE. In Dark of the Moon, Jeff Deischer shines the spotlight on the oddball, fringe and civilian heroes of his Auric Universe. This novel is build squarely upon the shoulders of the speculative fiction of the nineteenth century, tying in some ten stories or characters from the previous age of fiction.

AND NOW FOR SOMETHING COMPLETELY DIFFERENT
Writing under the pen name "John Francis", Jeff Deischer has produced a thrilling secret agent novel in the mold of James Bond, literally. Titled Skull & Bones, he says of it, "This is unlike my pulp work, written in the Fleming style. It was the hardest novel to write that I've ever done for that reason."


The Little Book of Short Stories: Collected for the first time anywhere are the short stories of Jeff Deischer. The tales herein run the gamut of pulp fiction, from 1930s adventure to science fiction to sword & sorcery to historical, and includes an all-new story featuring the Challenger.

The Spring volume of Jeff Deischer's THE GOLDEN AGE series is here! Bad Moon Rising (volume XI) stars Major Wonder, the Auric Universe's devil-may-care hero. Adapting Wonderman's series from MYSTERY and WONDER, this book contains six independent but interrelated short stories that covers the year 1947, and runs the gamut from straight superhero to horror to Sci Fi. And no, you haven't missed any volumes. Jeff is not writing them in order.

SUPERHERO AUTUMN
New for this fall is the fifth volume of THE GOLDEN AGE series, Future Tense. This one focuses on Major Future, the Auric Universe's version of Captain Future, in a tale that spans the years 1946-2430, and features a bushel of both superheroes and supervillains.

Also, in keeping with our practice of releasing books on Kindle a year after the print edition comes out,  Dark of the Moon and The Steel Ring are now available on Kindle, and the latter contains a bonus chapter preview of the sequel, The Twilight War.

Argent is the first volume in an all-new superhero series by Jeff Deischer. By "all-new", I mean that the characters are all new -- Jeff's own creations. Set during the summer months of 1961, Argent consist of three "parallel" novellas, each featuring different protagonists, all of whom are novice heroes. Readers will learn about the Argentverse (as Jeff calls it) along with these freshman heroes. Jeff says this is his best prose yet. I concur.

R. A. Jones returns to THE STEEL RING series with The Twilight War. This volume moves us into 1940, and the Steel Ring recruits new members as the Nazis unleash a super weapon unlike the world has seen before.

BUSY, BUSY, BUSY
This summer Jeff has turned out a number of books in his Argentverse, expanding the superhero universe he introduced last year in Argent. Night of the Owl stars the heroes of the Golden Age, the Three Musketeers, as they probe into a series of brutal murders by the mysterious Owl. The Superlatives is a group of global explorers who gain superhuman abilities as the result of their adventures, and in this novel, they travel around the globe, encountering the superhumans (both good and bad) of a number of nations. Strange Days features the Argentverse's weird heroes, outcasts who are deformed as a result of their superhuman abilities, and regarded with suspicion and fear by society. Modern Times is a collection of stories, with adult content. These stories are daring in a number of ways, pushing the boundaries of superhero prose fiction. Mystery Men is a return to Jeff's pulp roots, as three interconnected short stories showcase the quasi-pulp heroes of the Argentverse. All of these books are standalones, featuring different sets of protagonists, so can literally be read in any order.

Beyond Worlds Collide is the long-awaited sequel to Philip Wylie and Edwin Balmer's SF classics, When Worlds Collide and After Worlds Collide. It picks up where the second novel left off, bringing ideas in the two novels to fruition and extrapolating concepts. Written faithfully to the style and tone of the original novels.

PS  If you don't like the sales links to CreateSpace, you can always find our books at Amazon.
Posted by Sam Pepper at 2:33 PM 2 comments: